Cancer is an unfortunate reality of life. In The Pink endeavors to make cancer patients’ experiences better, by providing a one-stop location for obtaining all the essentials someone battling this horrific disease may need.

In The Pink is a nonprofit boutique located at 522 North Third Street at Jacksonville Beach. They have been in business since 2009, and have opened two other stores since. One is located in Sarasota, Fl, and the other opened in San Marco.
In The Pink was founded by Jeri Mallard, a two-time survivor of cancer. During her second diagnosis, she realized how difficult it was to find all the essentials. It was about nine years later when In The Pink came to life.

The boutique provides everything from mastectomy bras to radiation skincare. They serve women, men and children suffering with any type of cancer. They also have apparel ranging from t-shirts, hats and scarves, to garments and breast forms for post-surgical patients. The store even carries books, and a selection of gifts for family, patients or caregivers. They provide fittings for–and sell– wig and breast prosthetics. “We have five certified mastectomy fitters between our three stores,” said Sallie Gipson, a manager at the Jacksonville Beach location.

“We do serve women primarily. Much of what we do is specific to women,” said Gipson. But that doesn’t mean that men won’t be satisfied. In The Pink has their own salon which includes free head shaving by their volunteer hair stylist, Pamela. They also host private head shaving parties and Survivor Showers. 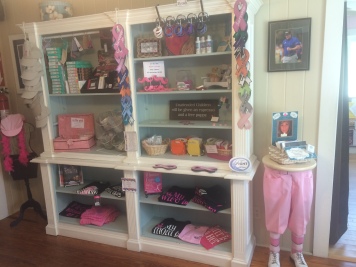 In The Pink breaks the traditional mould of what it means to be a store through their community action. They host an annual festival each year in September called The Fidelity Investments Jacksonville Dragon Boat Festival, which serves as a fundraiser for In The Pink. Located at the Jacksonville Landing, The Dragon Boat Festival is a paddling event with different teams competing with each other.

One regularly participating team, the Mammoglams, is comprised entirely of breast cancer survivors. Their motto is, “We’ve won the battle… Now let’s paddle!”

In The Pink is also a part of a few other events coming up before December, including free yoga sessions for all cancer survivors on Wednesday and Saturday mornings in the store. “We require that you RSVP because the instructors donate their time,” said Gipson.

Most major insurance companies are accepted at the boutique to cover costs for any items sold in the stores. However, if a patient is under-insured, or doesn’t have any insurance, In The Pink will donate items to that patient free of charge.

A strong network of donors enables In The Pink to provide many free opportunities to their customers. “We keep our doors open through donations as well as the little we make from sales of products in the store and Insurance claims,” Gipson said. They have donors who host events for them as well. The annual baseball game between the Ponte Vedra High School Sharks and the Episcopal High School Eagles, and the Chili Cook-Off at Jerry’s Grill are two such examples.

In the Pink is also a part of the Cami Fund, which supports those just getting out of surgery who do not have insurance with a camisole to wear.

In the Pink may have three different locations, but they state that one thing never changes: “Our commitment to making you feel comfortable. We do not consider our work a job…it is truly a ministry.”

View all posts by Contributing Writer