In 2008 a young woman named Victoria Enmon was diagnosed with acute lymphoblastic leukemia. Her story inspired the Sarcastic Gamer Community who sent her gifts, and games in an effort to support her. Unfortunately, Tori passed that same year. However, Tori’s former friend and founder of Extra Life, Jeromy Adams, took her tragedy and created a legacy from her memory, helping children just like her by raising money through gaming.

Extra Life originated in the heart of Texas, where Adams proposed a twenty-four hour video game marathon to help raise money and awareness in Tori’s memory. In the first two years Extra Life raised a total of 302,000 dollars, all of which was donated to the Texas Children’s Hospital that treated Tori. Since then, the project and community has grown exponentially. Now gamers can choose which hospital within the Children’s Miracle Network they wish to donate to and raise money for. This community includes thousands of gamers, and has pulled in 12,000 donors, including Playstation, to contribute to the campaign. What began as a way to honor Victoria Enmon’s memory has now inspired an entire community of people to help sick children and their families far and wide.

As Extra Life grew in size and strength, groups or “Guilds” were eventually formed. These Guilds, work together in creating an organized event furthering the mission of Extra Life and pulling an even larger community into the campaign.

One such Guild exists right here in Jacksonville, run by Captain of the Guild Maria Morgan, and Vice-President Amanda L. Marron. The Jacksonville Extra Life Guild was formed in 2012, and raised an astonishing 3,000 dollars for Wolfson Children’s Hospital and UF Health Jacksonville Hospital. 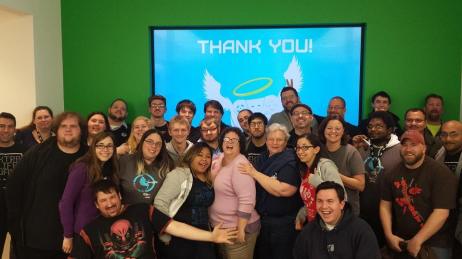 “Every year, a new goal to give our local Extra Lifers something in which to strive. Last year, the goal was to get 75 people recruited and get those people to raise $75 each so that we would be eligible for Guild status. They told us at 2 am on Marathon Day, over the Twitch stream, that we reached that goal”. Marron stated recalling last year when her group finally reached official Guild status. Reaching Guild status, along with the impressive returns Jacksonville’s Extra Life Guild has been able to achieve in their short time speaks to the Guild’s desire to help sick children and their families.

“Each volunteer raises an average of $100 and 100% of the money raised goes to the Children’s Miracle Network”, Craig Schwenn, secretary of the Jacksonville Extra Life Guild stated. Schwenn suffered from a birth defect as a child and had to have surgery. His story, like others in the Guild, are similar with either a sick child, or growing up as a sick child, while others have no personal connection and simply seek to help sick children and their families.

“My, now, 7 year old niece fell off the monkey bars last year and needed to have three different procedures to try to rectify a bone which was healing incorrectly. If it wasn’t for the specialized care for children at Wolfson, they may have not known what to do”. Marron explains passionately.

The strong sense of local community has helped Jacksonville’s Extra Life Guild greatly, however there’s always room and want for more expansion. Currently the Guild is looking into recruiting new members into their roaster. Seeking to find other like-minded individuals who want to help local children, and don’t mind playing video games for twenty-four hours – not as easy as it sounds – to do it. The Jacksonville Extra Life Guild meets once a month to discuss strategies in further promoting, and recruiting for Extra Life, along with ways to increase fundraising for their charities of choice.

Every penny a Guild member raises counts towards the aid of a child in need. That thought is what drives Extra Life members across the country. Medical care isn’t cheap, and every little bit can help towards saving a child’s life, or simply making them more comfortable. The Jacksonville Extra Life Guild seeks to do their part in raising money for two local hospitals and thus our local children.

“The donations and funds that we raise go towards supplying child-size medical equipment, preemie diapers, and all sorts of items that many folks may not realize. These items cost quite a bit. A bean bag that is used to re-position newborns in the NICU costs $18 a piece. It all adds up”. Marron explains.

Others have discussed the importance that is Extra Life, as well as their own individual participation. The campaign brings people together through the means of helping sick children across the country and building a sense of community of those who participate. Gamers who join in on the event have the chance to meet new people, learn the ins and outs of fundraising, and become a part of something special. The ability to help sick children and their families in your local area while meeting like-minded people while you play video games. What could be better?

“Children are our future and they deserve a running start. This is why we Extra Life”.

If you are interested in learning more about The Extra Life Guild of Jacksonville check out their Guild page and their Facebook.  If you’re going to be at Wasabi Con this coming Halloween weekend you can speak with some of the Guild members in person! They are currently holding meetings at Adventure Landing to socialize with their members and discuses upcoming events. Their next 24-hour marathon is November 7th so go get your spot!

Desiree Rodriguez is currently majoring in Journalism at Florida State College of Jacksonville. She currently writes for Coming of Faith, Geeked Out Nation, and Women Write About Comics. You can find her full body of work on contently, and follow her on her blog.