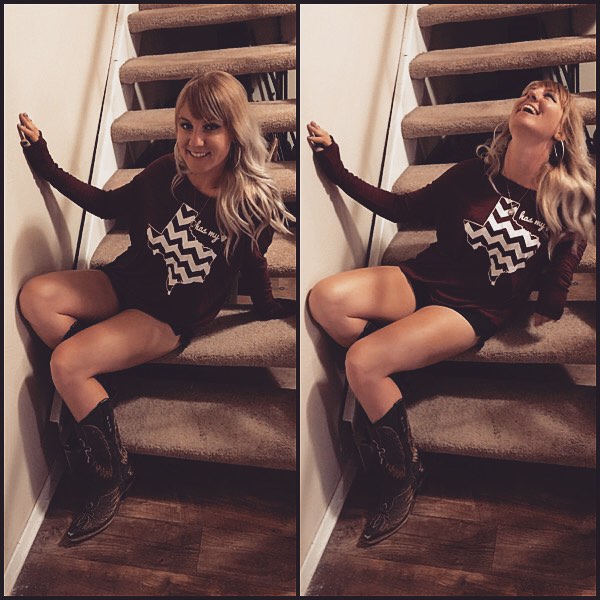 Most people know Sarah from her work on the popular radio program, The Lex & Terry Show, where she has been a staple for the last 6 years. Most people know the type of antics that occur on the show, but those people would be hard pressed to tell you much more about Sarah, outside of what they hear on the radio or see on the internet. There is always much more than meets the eye, or ear. In a blink and you miss it, take it at face value world, there is so much more to be learned from people who are taken for granted. They are taken for granted, either because of what they look like or what you think they do.

While Sarah is on the exterior, a beautiful, funny and charming woman. There is more to her than that, she is one of the hardest working people that I’ve had the opportunity to speak with. She is an intelligent, dedicated, and extremely caring person. One just has to remember we are not our jobs, we are the work that we do. We are the people that we meet and influence, as well as influence us. We are the people that we stop to help along the way and those who we carry with us. We are our passions and our goals for both the present, and for the future.

Sarah, thank you for the chance to talk to you today. My readers are college students, they are just starting out in their paths to success and would benefit greatly from your story. To start off, could you shine some light on the path to where you are today in your career and life. How did it all begin?

SM:  Hey! To be honest, the path that lead to what my life and career are now, is completely random. I started off college in hopes of becoming a zoologist, because I absolutely love animals. I was also working as a veterinary technician and had been doing that for a few years. Around that time, I was told by my mother that a morning radio talk show in Dallas(the Lex & Terry show) was taking in applications to become the new “chick phone screener” to replace the former one. I didn’t think much of it and moved on.

A few weeks later, my mother called me at 7:00 am to tell me to call the Lex & Terry show, because they had picked the finalists to come in for interviews the following week. I was a little pissed because I was now awake 15 minutes earlier than I had to be, but I was up and thought “why not?” I called into the morning show, talked to Dee & Taint and asked if I could get a spot among the other girls who were trying out for the job. They asked me if I was “hot” and then asked me to send them pictures of myself, then call them back. I was a little excited at that point, so I sent them a few photos of myself and called back and they decided that I was attractive enough to put up on the air. Shortly after that I went on the air with Lex & Terry, they gave me a quick little interview, threw some jokes my way to test me, see my reaction, how I handled things and then they agreed to let me come interview with the other girls as the “wild card.”

The next week I showed up very early in the morning, walked into the lobby only to find TONS of attractive and well-dressed girls all waiting to fight for the same position as I was. As soon as the other girls found out that I was the “wild card”, they were not a huge fan of me, but I couldn’t really blame them since they had been chosen over months and months and I called and got in literally days before the interview process started. The interview process lasted over a week and each day more girls were eliminated. After 4 days of stand up comedy, “iPod punishment” singing, public comedy bits, and talking on air, I found myself as one of the final 2.

That last Friday morning consisted of myself and the other girl telling some of our deepest secrets, then going through our purses and pulling out the most embarrassing thing we had inside. Hers were tampons..and mine was a camera full of photos that I did not want anyone to see. At the end of the show, they announced that I was the winner and would be the brand new phone screener. I was shocked because I had never won anything in my life, much less something this cool.

Fast forward 6 years and here I am now working full time with the Lex & Terry morning show being an on-air personality, editing and putting up podcasts, managing social media accounts and even running our LiveStream online video show. Long story short, take chances. Say yes to every great opportunity that presents itself to you because you never know what could come of it.

That’s a very cool story, you overcame the odds and rose to the challenge to seize an opportunity that was sought after by so many. That speaks a lot about your perseverance and talent. Now that you have had quite a bit of success through your work experiences, what are some of your future goals? Do you plan on staying in your current field or branching out on to another path? Do you have any other professional/personal interests that would draw you out of the media world?
SM: I can honestly say that I have no idea what direction my life will go in next. I was never one who decided what I wanted to be “when I grow up” and I still stand by that. I love to be constantly learning new things. I feel like it’s a good thing to move on to something new when you get bored with something and feel like you’ve achieved everything you can in a certain position. That’s when you start slacking off and becoming miserable and I never want to feel that way. I hear so many people talk about how miserable they are with their jobs and careers…Change it! It may not always be a very easy thing to do, but it IS possible. I went from being a veterinary technician to a phone screener to an on-air personality.
I also do in-game hosting for a professional baseball team, work part-time at a yoga studio, work part-time at an exotic bird shop and just got a job dancing next season for an MLB team. I stay busy and I do things that I love. Who knows what is in store for me next. TV? Travel? Helicopter Pilot? I have absolutely no idea what I will be doing 5 years down the road. That scares me a little, but it’s also one of the most thrilling and refreshing feelings and I’m not sure I would have it any other way.
Sometimes, you have to get yourself out of your comfort zone to find what your true potential really is. I’m sure no matter what you end up doing, you will be just as successful as you have been in all your other endeavors. Outside of professional interests and goals, what are some of your personal interests? Are you a huge sports fan?
SM: Personal interests… How long do we have? [Laughs] I just love to stay busy and have fun! I am a HUGE hockey fan(go Flyers!) and also a football fan(go Giants!) but I live and breathe hockey. I’m also a huge animal lover. In high school, I started my own little business where I would take in rescue reptiles and birds then go around to different schools and educational groups to put on educational animal shows, I absolutely loved it. I currently have two cockatoos that I live with, Gatsby and Lee Loo, and they are my life.
I also do professional wrestling, [Laughs] which is super random, but I grew up watching and loving WWE (WWF back then) so one day I thought, “Hmmm, I think I could do this!” So I did. I found a wrestling school in the area (XCW), started training with them and had a BLAST. It was so hard and so rough and you often felt like you were dying, but it was so much fun and I made some of the best life long friends in the business. I also worked 3 shows with the WWE last year, one of which was the big PPV “Hell in a Cell” show in Dallas! It was a blast and I learned so much. I also have taken up playing the guitar and I go to as many concerts as possible.
I also recently purchased a Jeep and I’m in a Jeep Club, where we go off road and wheeling all the time. I am obsessed with my Jeep and I annoy the hell out of all of my friends and family because all I do is talk about Jeeps. Other than that, I just love being outdoors, and traveling and I want to travel to as many places as I possibly can, before I die.
You have a pretty amazing life and have accomplished so much. I have a final question for you, What would you most like to be remembered for and what kind of legacy would you like to leave behind?
SM: That’s a tough question! I have thought about this before and over the years the answer has changed. When it comes down to it, it’s pretty simple for me: I want to be remembered as someone who helped people and tried to change the world for the better, as someone who made people laugh and as someone who wasn’t afraid to do or try anything.
Listen to Sarah Morgan every morning on the Lex and Terry Show.  Their free app is available online!

View all posts by therageofkage