This year’s Rock On The River presented by X102.9 was so freaking awesome! The lineup was stacked with talent like Young The Giant, Bearhands, Joywave, The Wombats, The Strumbellas, Finish Ticket, and Tomboi. With a lineup like this, the temperature was not going to be the only hot thing about that day.

As this was my third year attending Rock On The River my friend and I knew that investing the $20 to get into the VIP section at Mavericks Live would be worth it. Not only because we would not have stand out in the heat all day but, because we got to see a live interview with the bands and an acoustic performance before their main show on the stage downstairs.

Our day began with Finish Ticket inside Mavericks. They played a beautiful acoustic version of their single “Color” (which my friend and I sang along to shamelessly) and “Wrong” which lead singer Brendan Hoye said was the original way it was written. Not only were they brilliant acoustically, they put on one of the liveliest shows of the day on the Landing’s Main Stage! These guys were extremely fun and talented while remaining humble and kind enough to stay around to take pictures with fans!

Next up were The Strumbellas playing an acoustic rendition of their single “Spirits” with a fiddle making its first appearance on the Rock On The River Stage, which was pretty neat. But, I was definitely more excited about the Wombats hitting the acoustic stage next! They played one of my favorites “Greek Tragedy” with charm that literally had me squealing! Not only did they win me over, I got the opportunity to meet Dan Haggis and Matthew Murphy after the show!

Unfortunately, Joywave did not play an acoustic set and slightly took over Bearhands set on the main stage. Which honestly, did not make me too happy as Bearhands was one the top bands I wanted to see that day. Don’t get me wrong. I really like Joywave! I do! But, their sets should not have been combined and would have been enjoyed even more in their own separate glory. 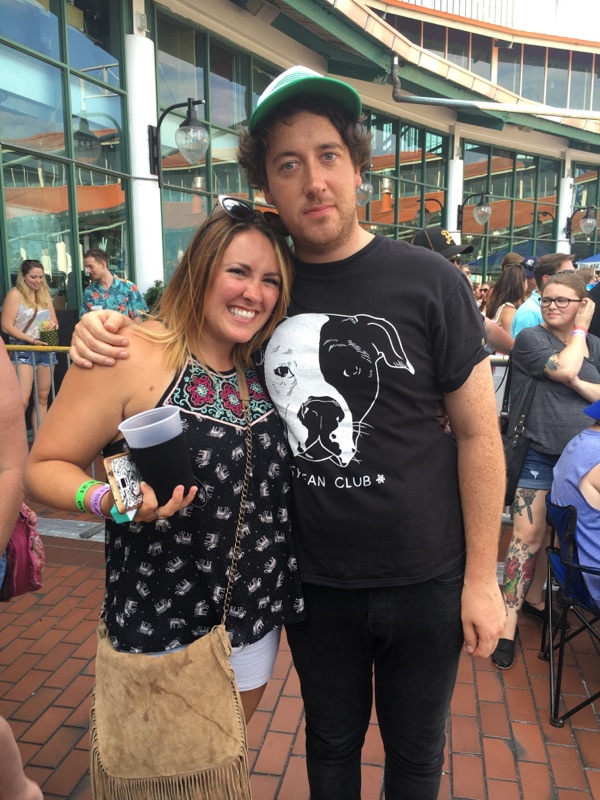 Taking on the challenge of sharing the stage, Bearhands unquestionably did not disappoint! After a wonderful acoustic performance of 2AM, they took to the main stage as the crowd roared and sang along to every song such as “2 AM,”  “Agora,” and “Giants.” Every couple of songs the two bands switched back and forth. When it was Joywave’s turn, they played their hits like “Tongues,” Destruction,” and “Bad Dreams.” Both bands were incredible and definitely had us all wanting more!

After wiping the sweat from our brows and as the heat slowly began to subside, Young The Giant took stepped up to the stage to wrap up the day. Playing hits like “Cough Syrup,” “Mind Over Matter,” and “My Body” I knew that the day could not have gone any better!

The talent at Rock On The River 7 was smoking hot, the crowd was enthusiastic and a little sunburnt, but when it was all said and done, it was well worth the heat and awkward tan lines. Well done X102.9! Looking forward to next year!

To find out more about Rock On The River, visit X102.9’s website:

To find out more about the bands check out their websites: