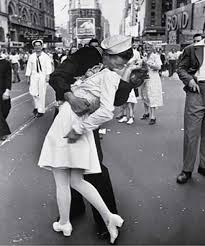 Not too long ago, I caught myself thinking of a girl that I hadn’t thought about in quite some time. Her name is Josie, and she’ll always have a special place in my heart because she was my first kiss. The long and short of it was pretty typical. We were both 14 and on vacation with our families, we snuck out of our houses one night to meet up at the beach, and we kissed at the end of the night. It wasn’t terrible. But I used way too much tongue and I had no idea what I was doing.

I hadn’t thought about that moment in years. Interestingly enough, I think I can directly correlate that event in my life with the girls that I pursue and with elements of my dating behavior now. I went around South Campus and asked students if they would like to describe their first kiss stories, and how they think their first kiss affected their dating lives up until now.

“I guess my like, very first kiss didn’t really mean anything. My first significant kiss was with my last girlfriend in high school. It felt right. It felt right to be in the moment with her. With the person I’m with now, it reminds me of that same feeling. It’s just you and that person, and that’s why I feel like it means something.” – R.

“My first kiss was when I was 12 at sleep-away camp. Her name was Courtney, and she actually ended up being my girlfriend for a week. It was actually surprisingly good. I’d have to say that affected my romantic interests, because I’m attracted to both girls and guys. Every time I get involved with a girl, I connect it back to that moment.” – K.

“My first kiss happened when I was 14, and it was actually a surprise. We were walking home from the beach and he just stopped and kissed me all of a sudden. I’d have to say that with every guy I pursue now, I want it to be just as spontaneous and fun as that moment.” – L.

“My very first kiss was just a peck on the lips on the back of the bus when I was in fifth grade. I think the most romantically significant kiss was my first boyfriend sophomore year of highschool. That moment kind of made me realize that I want a kiss to feel like that all the time you know?” – A.

“I think my first kiss was in sixth grade. It was actually very awkward, like we were just standing in the middle of the street. But it was like really awkward because we had both never kissed anyone before, so it was interesting. I wouldn’t say that it’s anything that’s stuck with me or anything, other than like a first experience sort of thing.” – S.

“When I was in seventh grade, I finally got to kiss my crush. We were on a school field trip and snuck away from the group and he kissed me. When it happened I kind of freaked out, because I really liked it and I wanted to do it like all the time. It was pretty cool. I still like kissing.” – V.

Just from the few students that I got stories from, I can see that some students can hold their first kisses accountable for the way they pursue their romantic partners up to today. Most of the people that I talked to hadn’t even thought about their first kiss in a while, and had to dust off the filing cabinet upstairs to try and recall exactly what went down. Whether you know it or not, that one special moment in your life paved the way for the start of your love life. However, I suppose the degree to which each individual is affected varies from person to person.

I just wanted to get to know some of the students around campus a little better, and I guess personally relive a moment in my life that I’d not exactly forgotten about, but didn’t realize would have an impact on my dating life now. It’s nice to know that I’m not the only one who feels like their first kiss has left its mark on them.

View all posts by Contributing Writer