It all started on August 26, 2016; Colin Kaepernick took a knee during the national anthem at an N.F.L football game. His action set off a nationwide protest.

On September 1, 2016, Kaepernick repeated the same action during the national anthem. From that moment the media has kept an eye on Kaepernick. After the protest, Kaepernick stated in a press interview that “I am not anti-American; I love America, I love people.” He also said that he was not protesting to be anti-military or to cause any disrespect to the troops. When Kaepernick started his protest, he sat down, but when confronted by his teammate Eric Reid, they decided to take a knee.

Reid was quoted saying, “After hours of careful consideration, and even a visit from Nate Boyer, a retired Green Beret and former N.F.L. player, we concluded that we should kneel, rather than sit the next day during the anthem, as a peaceful protest. We chose to kneel because it is a respectful gesture. I remember thinking our posture was like a flag flown at half-mast to mark a tragedy. It baffles me that our protest is still being misconstrued as disrespectful to the country, flag, and military personnel. We chose it because it is precisely the opposite.” 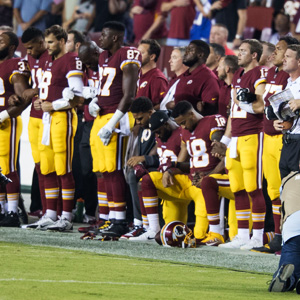 Last weekend millions of football fans saw many N.F.L players from teams including New England Patriots, Jacksonville Jaguars, Cleveland Browns, the Denver Broncos, and the Miami Dolphins take a knee or stand arm-in-arm. Furthermore, the entire Seattle Seahawks and Nashville Titans teams stayed in the locker rooms during the anthem to protest and highlight the social injustice and police brutality against African-Americans.

There has been some pushback to the players’ protest from President Trump. He said, “N.F.L owners who see players disrespecting the flag” should say “get that son of a b—- off the field right now, he’s fired.” An unwelcome statement that triggered many Americans to respond by claiming they will boycott the N.F.L’s games for the remainder of the season if players keep taking a knee or stand in-arms. Some even attempted to return or sell their season tickets. Although some fans are angry at the protest, others praise the players for their efforts in standing up together for something they believe.

“If NFL fans refuse to go to games until players stop disrespecting our Flag & Country, you will see change take place fast. Fire or suspend!” President Trump tweeted. Many argue that the president has misunderstood the reasoning behind the protest, because President Trump assumes the protest is all about disrespecting the flag. The players say that it is a protest against the social injustices that many black individuals face on a daily basis, and also against the ongoing police brutality towards many people. None of which Mr. Trump has commented upon since his initial tweet about the protests. It seems he is more focused on the disrespect issue rather than listen to the entire argument Kaepernick and other players have set forth.

Congress shall make no law respecting an establishment of religion, or prohibiting the free exercise thereof, or abridging the freedom of speech, or of the press, or the right of the people peaceably to assemble, and to petition the government for a redress of grievances” as stated in the Bill of Rights.

Overall the players have a right to protest the injustices many face on a day-to-day basis.

“Disrespecting the flag.” “People have died for this country.” “Think about what your actions mean to the troops.” many tweeted after Sunday’s game. The tweets do bring into question what the troops and military officers think about the protest. We know it is within our rights, but is it disrespectful to take a knee during the national anthem?

To better understand why some people would see the protest as disrespectful to the military, I contacted former military Sergeant Bernie Jean, who faithfully served his country in the States and Afghanistan for over eight years. He is also my uncle. “Everyone is entitled to have their own opinion, but everyone wants to be correct. Remember what you feel about an issue is beyond my control,” Jean said. What Sergeant Jean is referring to is the hundreds of Facebook posts, tweets and comments left on millions of profiles in response to the protest.

When asked how he felt about the players taking a knee or linking arms during the national anthem, Sergeant Jean responded,

Right or not right, can we still love each other… can we show respect towards each other. I believe that a person’s actions should be recognized. We do not have to accept another person’s protest, but we should respect their right to protest and them as a person”

As of March 2017, Kaepernick has left the N.F.L. He is now focusing more on charitable endeavors and also spreading his message of social activism, mainly through the Colin Kaepernick Foundation he started last year to help fight oppression. He plans to donate $1 million, plus the profits from his 2016 jersey sales. So far he has given over $900,000 to more than a dozen charities. Kaepernick has no ambition of returning to the N.F.L.

Former Sergeant Jean wanted to leave readers with a small, but powerful message. “Practice the right to respect others, don’t practice fear and hate. There isn’t freedom in hate. We may not like what others do, but we must respect them.”

View all posts by Jesuel Rivera