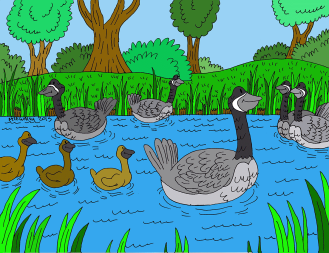 My topic for this week’s column is “Canadian Geese on Campus”. I spend most of my time at the South campus, so that’s the main focus of my article. When I learned what my topic was, my first reaction was “… Um?” …like “The Good, the Bad, the Ugly” or the “Indifferent”? I personally didn’t have really strong feelings about the geese on campus except that I love seeing them fly in V-formation and I don’t like the poop.

I started off by making a little survey form that asked for opinions. I gave it out to 25 students in 2 of my Digital Media classes and I got 21 responses back. The results were evenly divided into three groups. 7 went for the “Good” status (students liked/loved the geese being on campus). 7 went for the “Indifferent” status (students didn’t really care one way or the other about their presence on campus ~ except for not liking the poop). Lastly, 7 declared for the “Bad” or “Ugly” status (emphatically stating their disdain for the birds and hating their presence on campus).

I really didn’t know much about Canadian Geese. So, I did a little research and found some interesting facts about them. The first thing I learned is that I’ve been calling them the wrong name. Their name is not “Canadian Geese”; it’s “Canada Geese” (Branta Canadensis). Although Canada geese have a long lifespan (some live as long as 10 to 24 years in the wild), most die within the first year of their life because of predators. There are at least eleven different species of Canada geese, ranging from 3 to 15 pounds.

Canada geese are herbivores (plant eater). Their diet consists of grass, berries, grains and seeds. They are adaptable to many habitats. It was interesting to learn that the geese are monogamous throughout their lives unless their mate dies. Maybe people could learn something from them! Canada geese are aggressive by nature. They spread their wings, produce hissing sounds, and will attack an intruder using the beak when they are threatened, especially if it’s near their nests.

These birds were nearly extinct due to excessive hunting during the late 19th and the beginning of the 20th century. Some feel the program was too successful because of the number of birds is too much now. In some places, the Canada goose is treated as a pest because it reproduces quickly, damages crops and pollutes areas with high quantities of droppings which are unfortunately rich in bacteria. They are even hazardous, especially around airports, where collisions with planes can be very dangerous).